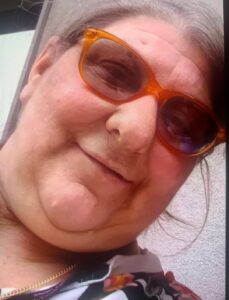 Cynthia “Cindy” Elaine Walker was a caring mother, grandmother, sister, and friend. She passed
away on April, 23, 2022 at the age of 59 in Vincennes, Indiana.
She is survived by her children; Starrann Marie Walker and her fiancé, Rio Delano Hudson of
Vincennes Indiana, William Henry Walker III and his long time girl, Judy Saavedra of
Jacksonville, Florida and Jalessa Danielle Walker of Vincennes, Indiana.
Cynthia will watch over her grandchildren, Devon Dakota Walker and Lincoln William Hudson
of Vincennes, Indiana and Emily Naoma Walker Swint and William Henry Walker IV of
Jacksonville, Florida.
Cynthia will be missed by her siblings; Elizabeth Cantelmo, John Wargo, Mary Wargo, Theresa
Naylor, Cecilia Cummins, Nancy Perko, Concetta Paglegy, Loretta Estlake and Daniel Wargo.
Cynthia was born on November 15, 1962 to John Harold Wargo and Josephine Theresa Wargo in
Warren, Ohio. In 1988, Cynthia with her then husband and twins, Starrann and William moved
to Jacksonville Florida. Cyntia resided there along with her youngest daughter, Jalessa until 2018
when she moved to Vincennes, Indiana. Cynthia loved to make people laugh and would put
herself before others. Cynthia was a stay at home mom while her children were in grade school.
She enjoyed spending time with her kids and grandkids, loved going to the beach, wolves and
anything Native America.
Cynthia was preceded in death by her parents John and Josephine and her sister Joanna Emery.
The family would like to thank everyone for their heart felt messages and prayers during
Cynthia’s illness and during her time in Hospice. Cynthia’s wishes were to be cremated and there
will be no memorial at this time but a Celebration of Life will be announced in the future.
Flowers, donations, and/or condolences may be offered at 1211 N. 10th Street, Vincennes, IN
47591.