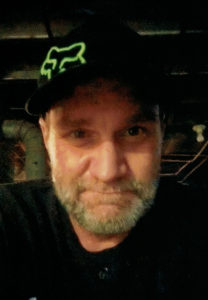 On Sunday September 1,2019, Clinton Lee Whitehead, husband and loving father of six passed away at the age of 45. Clinton was born on September 21, 1973 to Rita Mason and Larry Whitehead and grew up in Somerville Indiana.

Clinton drove a truck for fourteen years supporting his family. He loved the outdoors and spending time with his family. A rock hound at heart, Clint never met a rock he didn’t like. He was a skilled craftsman with a rock. Clint made many beautiful stones. He was the kind of guy that would help any in need. There was music in his heart, he is greatly loved and missed.

Clinton was prceded in death by his father, Larry, and both his mothers, Rita Mason, and Paula Whitehead, his grandparents “Rabbit”Whitehead, Paul and Mary Alvis, and Silvia Alvis. He is survived by his six children Ashley, Logan, Shuana, Amber, Shelby, and Jesse, and his wife of twelve years Amy. Clinton also leaves behind his stepmother Paula, and his five brothers Barry (wife Stacey) Whitehead, Roger Whitehead, Ryan (soon to be husband Tim Satterly) Whitehead, Ricky (wife Stephanie) Whitehead, Patrick (wife Amanda) Wood.

There will be a Celebration of Life Ceremony held on Saturday October 12, 2019 at the VFW on 1202 Main Street Petersburg, IN from 12:00 to 3:00 PM. Come and help celebrate all the good memories of a dearly loved man.