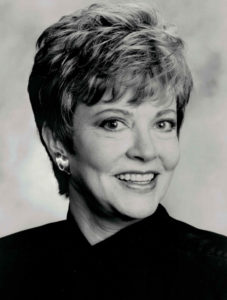 She was married 56 years to Charles “Chuck” Bauer.

Her older son, Christopher, has a daughter, Cicely and a son, Casey Bauer, both of Evansville.  Her younger son, C.J. Bauer, is married to Christina (Evans) and they have two sons:  Charlie and Cade Bauer, all of Northbrook, IL.  Her brother and his family live in Ohio.  Her parents were Roscoe and Kathryn Baker who lived in Ohio.

She attended Miami University in Ohio for 3 years, then married Charles and graduated from Wayne State University (Detroit, Michigan) with a B.S. degree in elementary /special education and then taught deaf children at the Lutheran School for Deaf (Detroit.)

After moving to Evansville, Cheryl was on the Board of Trustees of the Evansville Museum for 6 years, on the History Committee for 8 years, a long-time member of the Museum Guild serving as corresponding secretary for 2 years, a Museum Docent (tour guide) for 18 years serving as training chairman for 6 of those years.  She did her UE internship at the Museum studying Costume History.

She took additional courses at University of Southern Indiana & University of Evansville.  From Syracuse University she took a fashion design course in London and Paris and was granted special permission to do research in costume storage areas of Kensington Palace, the Metropolitan Museum, The Ohio State University, & Akron University.  As a design student in Paris, she visited the workrooms of haute couture designers Dior, Lanvin, Hermes, Louis Vuitton, and lace-making atelier.  In London she met with famous hat/fascinator designer Phillip Treacy.  Thereafter she assisted Evansville Museum curator Mary Bower with 3 fashion exhibits.

Cheryl was a devoted member of Inklings Book Club for many years, serving as secretary for 6 of those years.

She was always a supporter of Planned Parenthood.  Also was a member of the Philharmonic Guild.

She acted in 2 plays at Miami University Theatre, a small role at Evansville Civic Theater and in an independent film produced by Margaret McMullen & Patrick O’Connor. (Sacred Hearts) She was a member of Shanklin Theatre Society.

She cherished all her many friends, but especially dear were Suzy Lantz of Seattle, WA and Mary Elizabeth Donovan of Tacoma, WA.  With whom she communicated frequently.  Also “Sis” Phyl Neumann, Georgie Oswald, Bonnie Rehnquist, Karen Meisner, & her cousin Bruce Fleming.

Highlights were traveling with her husband, and a trip to England and Scotland with Karen Vaughn and a tour of Europe with Gail & Herb Hurn.

Since her stroke in January of 2015, her devoted husband, Chuck has been her caregiver.  He was assisted by son Chris and special friend Julie Crews.  She was deeply grateful to all three.

There are no services.  The body will be cremated with the ashes strewn by the family at a later date.