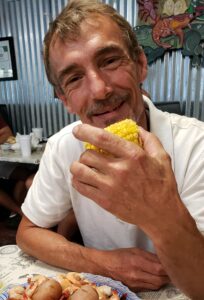 Zeigler, IL – Charles Brooks Lyell, 49, of Zeigler, Illinois, passed away on Tuesday, January 10, 2023 at the Linda E. White Hospice House in Evansville, Indiana.  He was born on July 22, 1973 in Herrin, Illinois to the late Ron Lyell and Linda (Parola) DuPrey.

He is survived by his children, Tessa Ellington, Autumn Boyd (Justin), Storm Slinkard (Matthew) and Aidan Lyell; his granddaughter, Skarlet Boyd; several siblings as well as many nieces and nephews.

Charles is preceded in death by his son, Austin Lyell; his mother, Linda DuPrey; his father, Ron Lyell; his brother, Tony and his step-father, Kenny DuPrey.