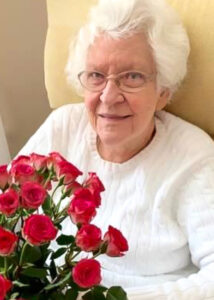 Carol Benn Johnson, 89, of Evansville, passed away Thursday, Jan. 28, at Ascension St. Vincent hospital. Carol was born in Ord, NE, on January 14, 1932, to the late Henry and Julia Benn. She enjoyed growing up on a farm and was the youngest of five children.

Carol earned a bachelor of science in nursing from the University of Nebraska.  At a Christian organization on campus, she met a very good man — Kenneth Eugene Johnson. They married and Carol worked as a nurse, supporting her husband as he earned a degree in mechanical engineering. Ken later enjoyed a 26-year career with Caterpillar Tractor Company. Together they were blessed with three children and eight, precious grandchildren.

While raising her children, Carol volunteered as a den mother, a Sunday school teacher and led by example in reaching out to those in need. Her children grew up on the church pews in Washington, IL. Later in life, Ken and Carol lived in Peoria, IL, for more than 30 years, and enjoyed restoring a 1892 Victorian home on Moss Ave., nicknamed “Riverboat House.”

After her kids were raised, Carol pursued her love of the English language, immersing herself in the coursework necessary to earn a Master’s in English at Illinois State University. Her schooling was interrupted to care for her husband as he endured Lou Gehrig’s disease for the next 10 years.

Throughout her life and into her 80’s, Carol often could be found in her yard tending to her rose bushes and many other beds of flowers. She began writing poetry in college and continued to be a proficient writer for decades. She was a knowledgeable collector of antiques, a well-read conversationalist, an earnest prayer warrior for her family, and a lover of all things chocolate.

Carol is survived by her son, Thane Johnson, of Lake Villa, IL; her daughter, Leslie Pape Summers, of Newburgh, IN; her daughter-in-law’s, Nina Johnson and Julie Johnson; and her son-in-law, Mark Summers.

In addition to her four siblings, Carol was preceded in death by her husband, Ken Johnson; her son, Kenric Johnson; and her son-in-law, Tony Pape.

Memorial contributions can be made to the Alzheimer’s Association, the largest nonprofit funder of Alzheimer’s research, who offers families valuable resources such as a 24-hour helpline with master’s level clinicians, on-line support groups and forums. Just go to alz.org and click “donate,” if you have interest in supporting this cause.

A graveside service will be held at a later date in Peoria, IL, where she will be buried beside her beloved husband.