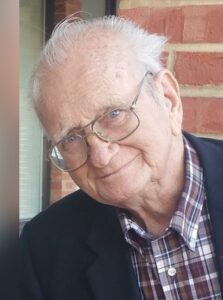 Carl Edwin Woodall, 85 of Evansville, Indiana, received his Heavenly reward and reunited with the love of his life, Marianna, on Thursday, January 12, 2023.  He was surrounded by his loving family at home.

Carl was born in Marion, Kentucky on March 5, 1937 to Christine and Carl Woodall.  He was one of ten siblings.  He married his high school sweetheart, Marianna on November 4, 1955.

In 1960, Carl went into the United States Army, where he was a driver for the Colonel and expert rifleman.  He was a carpenter and fixer of all things.  After a four year apprenticeship in carpentry school, he worked at Whirlpool Corporation for 32 years and retired in 1995.

In 1966, God blessed Carl and Marianna with their daughter Lori.  She was the joy of their life.

He was a lifetime member of Mt.Pleasant Church, formerly known as First Church of God, where he started going as a teenager.  Carl was passionate for his love for Christ and his family, always making a way for others to get to church.  He drove for the bus ministry for many years with his buddy Larry Newman.  He served as a board member for 28 years, several of those as treasure.  He enjoyed supervising the construction of the new Mt. Pleasant Church.

The family would like to thank the staff and nurses at Heart to Heart Hospice for their compassion, love and guidance through this difficult time.