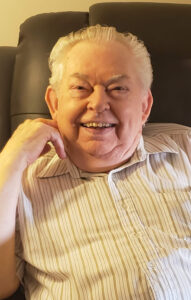 Bob L. Palstring, 84, of Evansville, Indiana, passed away on Wednesday, October 12, 2022, surrounded by family and friends at Heart to Heart Hospice.  Bob was born on July 1, 1938, in Matthews, Missouri to Zola and Carl Palstring.

Christmas of 1955 was very special to Bob.  As a senior in high school, he fell in love for the first and only time with a girl named Pauline from Barlow, Kentucky. He had known her family all his life, and most of their dating was spent by writing letters and making occasional visits to Pauline’s hometown.  Bob graduated from Matthews High School in May 1956.  Unable to find work locally, Bob was invited by his Uncle Clyde to come live with him and his family in California and try to find work there.  That was the beginning of his 35 years with the Postal Service. While there, he wrote to Pauline and asked her to marry him.  They married on Thanksgiving Day, November 22, 1956, when they were 18 years old.  After three children, Bob applied for a transfer to Evansville, Indiana to be closer to both his and Pauline’s families where he worked a variety of positions with the Postal Service and was promoted to Postmaster of Rockport, Indiana, retiring eight years later.  Loving to work, he was also a licensed real estate agent and appraiser.  Bob had a beautiful bass voice and enjoyed singing in quartets and choirs his whole adult life—nearly 40 years at Trinity United Methodist Church where he faithfully served the Lord.  He loved singing with his dear friends, Orville Martin, Mike Turner, and Jim Hancock in their Trinity Aires Quartet.  As an avid stamp collector, Bob loved to give gifts of stamps of special meaning to those he cared about and appreciated.  He loved his children and grandchildren and enjoyed creating fun spaces for the kids to play at his house, including a go-cart track around the large front and back yard.  He loved to laugh, tell stories and jokes, and often described his vacations and trips by the restaurants he went to.

A celebration of Bob’s life will be held at 2pm on Wednesday, October 19, 2022, at Trinity United Methodist Church, 124 S. 5th St., Rockport, Indiana 47635 with Pastor Mike Turner of Christ Community Church of Dale officiating.  Friends may visit with the family from 1pm until service time.  Memorial contributions may be made to Trinity United Methodist Church, Rockport, Indiana.

The family extends special thanks and appreciation to the staff at Deaconess Gateway Hospital; Encompass Health Deaconess Rehabilitation Hospital; Heritage Hospice; and Heart to Heart Hospice for their wonderful care and compassion for Bob and his family.