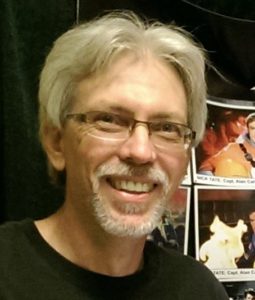 Bill Early Jr. (57) of Cannelton, IN passed away on Friday, April 24, 2020.  He was born June 16, 1962 in Owensboro, KY of Ozzie Newcom-Early (deceased) and Bill Early Sr. (deceased). He graduated from Daviess County High School in 1980 and enrolled right after in the United States Air Force before being honorably discharged in 1994, achieving the rank of Staff Sergeant. Bill was an avid hobbyist and model builder, completing numerous film-quality model kits, spaceships and dioramas. He entered many of his builds into contests, winning gold and silver medals for his skills. He was an accomplished electrician by trade and loved to apply his knowledge to his passion of model building. Bill was a lover of all things science fiction, an avid reader, and participated in charity endeavors with groups like the 501st Legion and Rebel Legion, both prestigious Star Wars costuming organizations that worked with groups like the Juvenile Diabetes Research Fund and Make a Wish. He is survived by his loving wife Barbara Early, son William Early III and his wife Julie, step-son Lee Snyder, daughter Denise Lyubchenko and her husband Denys, his sister Gay Buschkoetter and her husband Jim, and three grandchildren: Haylee Snyder, Jake Early and Zoey Early. He also leaves behind two animal companions, Pedro and Willow. No services will be taking place, the family asks in lieu of flowers that donation inquiries be made via email to earlyfamily62@gmail.com.