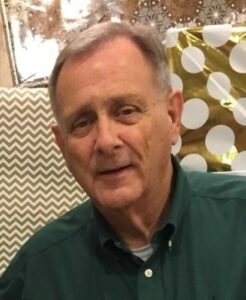 Bartlett “Bart” Bryan 79, passed away on July 18, 2022 in Evansville, Indiana.   Bart was born in Washington, DC to the late Katherine and Lewis Bryan.  He was a graduate of Carson Newman University and served our country in the Navy, spending a year in Vietnam.  Bart was able to have more than one career during his lifetime.  He worked in sales, owned his own business, and finally taught high school before retiring from Pasco County Schools in Florida.

Bart enjoyed football, baseball, golf, old cars, and western books and television shows. He also sang in the church choir with his beautiful bass voice for many years.  He is remembered as an outgoing person who had a big heart and a great sense of humor.

Bart is survived by his wife, Shelia; his daughter, Jennifer Marin and her husband, Darryl; his son Adam Bryan and his wife, Jordan; along with his four grandsons, Cade Marin, Chase Marin, Kellen Bryan, and Kason Bryan.  He is also survived by his sister-in-law, Rebecca Bryan, and nieces, Katharine Azar and Lauren Palmer and their families.

In addition to his parents, Bart was preceded in death by his brother, Lewis Bryan, Jr.

The family wishes to thank the staff at Adaptive Hospice for their excellent care over the past few months.

A celebration of Bart’s life will be held in Florida at a later date.

Condolences may be made online at www.SimpleCremationEvansville.com