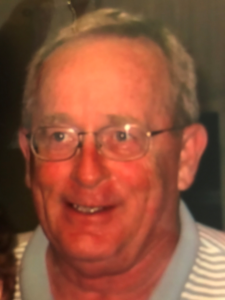 Robert Emerson Wylie, age 81 of Carmi, Illinois died on Thursday June 6, 2019, at Deaconess Midtown.  He was born on June 1, 1938 in Carmi, Illinois to the late Paul and Evelyn (Green) Wylie.  He spent most of his career working for the State of Illinois ending his work life as the local Director of the Department of Public Aid.  Throughout his career he focused his work on making other peoples’ lives better.  He was a military veteran, public servant, husband and father, and an avid golfer.

In a community defined by its multi-year state winning golf teams, Bob was intimately engaged with the community’s young people who represented the best home town ever in regional and state golf contests.  He could be found many afternoons and most weekends with his best golfing buddies Henry Lewis and Dick Endicott on the sweetest nine hole course in the world.  One of his favorite recent memories was participating in the reunion of those state winners.

While his social life often revolved around the Carmi Country Club, he served his community in many ways, as a school board member and in many other service roles.  He was a great booster of all Carmi Bulldog teams and of the Carmi League of Arts. He loved his hometown and supported all efforts to make it better.

Consistent with his wishes, there will be no funeral service.  However, his friends and family are invited to gather at the Carmi Country Club on Wednesday, June12, 2019 from 4:00 to 7:00 p.m.  Unlike during his life when he always had to borrow a buck to get his coffee or a beer, drinks and appetizers are on him for this celebration.  Arrive early to make sure his money doesn’t run out.  If attendees are motivated we will accept donations for Habitat for Humanity at that time.